Did you know  Wikipedia list over 75 countries that produce fashion events?

Here’s a little context of how big the fashion show industry is:

Are you familiar with the Big Four?  The four fashion capitals and most prominent fashion weeks are held in New York, London, Milan, and Paris.  The first New York Fashion Week [NYFW] was held in 1943 and is based on a much older series of events called “Press Week”, founded in 1942.

The fashion scene has become more multi-polar with other cities of fashion weeks in Los Angeles, Berlin, Tokyo, Shanghai, and Madrid.  Beyond that, there are independents and producers in just about every key city across the globe that produce fashion shows.  Hmm. . . so how many does that add up to in a year?  Wikipedia list over 75 countries that produce fashion events.  Let’s start adding . . there are a number of cities in each of those countries, fashion weeks generally are at least twice a year, plus all the local and regional independent producers.  You do the math! 1000’s of yearly fashion events, worldwide!  I project there could be 5,000 to 10,000 shows per year. That’s a lot of fashion.  The next question to ask, how necessary is it.

“Although fashion has it’s utilitarian purpose, we can view it more than just a consumptive object.  That’s what the new generation of designers are doing.  They are feeding us an intelligent dialogue on fashion’s contribution to art, culture, and practices of sustaining earth’s resources.” 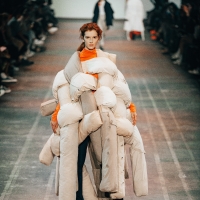 What to Do About the Unsustainability of Lingerie?

“Victoria’s Secret is only one of the many brands that contributes to the swelling levels of waste the industry is generating. Every year, the entire apparel industry, including lingerie, generates 15 million tons of textile waste.”